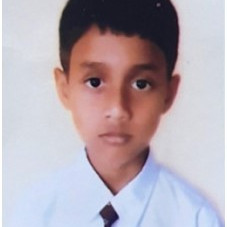 Ayan comes from a Hindu family. The predominate religion in his community is Hinduism as well.
Ayan has a younger brother Anish who is 6 years old. His father is an accountant earning approximately Rs. 15,000/$ 200 per month. His mother is a homemaker. Ayan’s hearts desire is to be an Indian astronaut in the future.